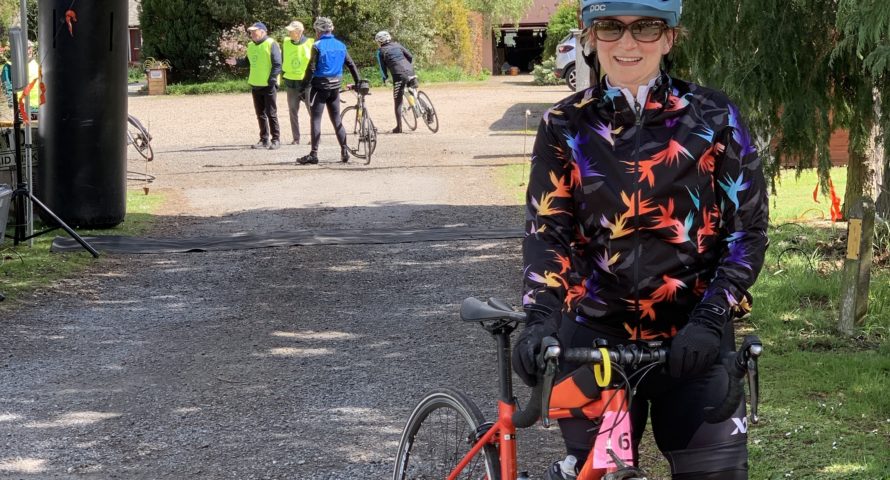 I’m at the halfway point in my training and Pippa suggested I find a 40 mile road event in May, to test things out a little. So we drove up to a wee town outside Perth to complete the Tayside Challenge. A 46 mile road ride.

The Big Kiwi agreed to do it too. There were lots of folks with swanky bikes and kit who were in road clubs and much chat about the route, which many of them seemed to know. We set off in our small groups of about 10 other riders. It was all very friendly with starting line Jelly Babies being handed out and encouraging chat from a lovely round the world cyclist.

It wasn’t a closed road event and although it was early morning there was still some farm traffic and cars on the narrow roads. And it was cold and windy. And it was uphill. I was last in my group and was quickly overtaken by several of the groups behind. As we rode on, I could feel myself getting more and more tense, gripping the handlebars and getting worried about every bump in the road and rider who passed me. After half an hour, I pulled into the side of the road and got off. I had decided I had had enough and that I just couldn’t do it.

I had done a good few longer rides since my big wobble a few weeks ago but worrying about falling and punctures was definitely filling my head more than the joy of the open road. At that moment I had convinced myself I just couldn’t do it, that I didn’t know where I was going, that I couldn’t ride that far and that everyone else was an expert and I was in their way. The Big Kiwi deployed The Dad Voice which is usually reserved for when the cat has crapped in the bath or one of the kids is misbehaving. He patiently talked me down from the edge of my own meltdown. And eventually, it worked.

I had a double espresso gel (very tasty and far less grim than those lime ones), an electrolyte drink and got back on my bike. And pedalled, into the wind and up the hills. The countryside was lovely, a red squirrel ran across my path at one point and the sky was blue and cloudless for most of the way. It stayed cold and the wind was pretty grim. It moved from headwind to crosswind throughout and it was gusty so it took a lot of getting used but when it dropped, it was a really great ride.

At 20 miles we got to the main event –  the food stop, which was a revelation. A hall in the middle of nowhere full of tuna rolls, Tunnock’s caramel wafers, home baking, cups of tea and staffed by the most lovely volunteers. I could have curled up under a trestle table and stayed there but I wasn’t allowed.

By the second half I had relaxed a bit more and settled into my riding style of dragging myself slowly up the hills and gripping the brakes in fear on the downhills – it’s a deadly combination.

When I looked at my time, I could see that I had added somewhere between 35 minutes to an hour (depending on which timing device you believe) in what I will call ‘faff time’. I have always known I am an Olympic standard faffer but this level is new territory for me. My stops included – one to hoik my left knee warmer up, one a few seconds later to hoik my right knee warmer up, one to tuck my hair behind my ear, one for a really scenic pee stop in a field. So a big learning from me is to stop less and be less discerning about where I go for a nature pee – it’s hardly rocket science.

And I did have some successes – I got food from my bag and ate on the go, for the first time. I got my drink out of my bottle cage and drank from my water bottle without dropping it. And I got there in the end – I rode my bike for 46 miles.

Inspired yet? Of course you are! Go, go go