Tales from a Bunker 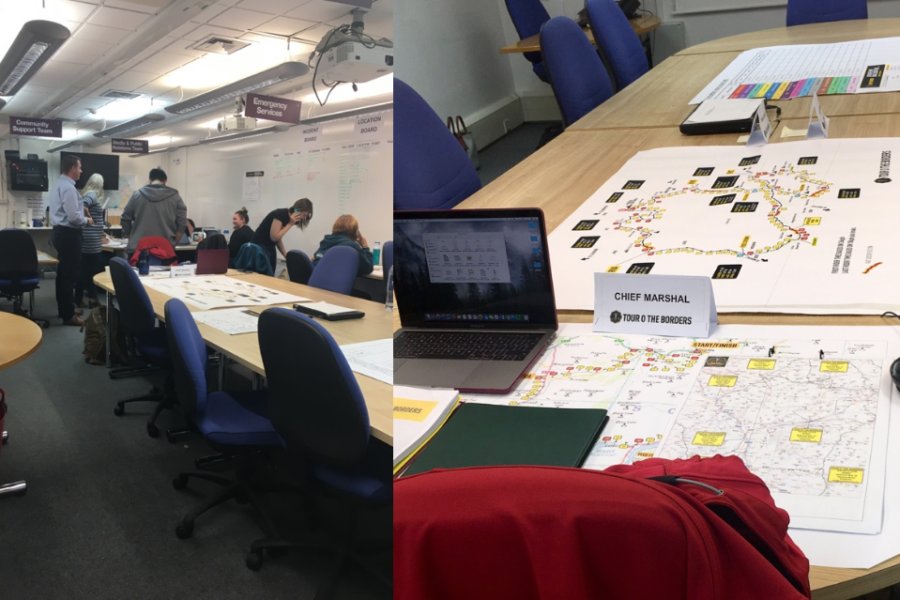 Three years ago I had the pleasure of cycling through the beautiful Scottish Borders countryside on car free roads during the Tour o’the Borders or Touro as it’s known. There is something rather noble about pedalling along country lanes safe in the knowledge that you won’t get hit by a car pulling out of a junction or squeezed into the gutter by a passing bus or lorry.

Anyway, I had the chance last Sunday to be part of the team that manages the Touro event. I arose at the ungodly hour of 4am and after a couple of cups of coffee I drove to the nerve centre which is located at the headquarters of Scottish Borders Council.

The US President has The Situation Room in The White House, The UK Prime Minister has COBRA (Cabinet Office Briefing Room A) in Whitehall and Scottish Borders Council has “The Bunker”. The Bunker often comes into operation during the Winter months when council staff and the emergency services deal with whatever Mother Nature throws at them. There is even a whiteboard with the names of all 73 schools in the Scottish Borders already prepared for the inevitable Amber Warning Snow event.

Whilst we didn’t have to concern ourselves with schools we did have almost 2000 cyclists in our charge. Luckily, we didn’t have any snow to worry about on the 2 September, although they did have floods to deal with a few years ago and many cyclists had to rescued by farmers with tractors.

The Bunker is actually the basement at the SBC Headquarters in Newton St Boswells. It’s a series of 4 rooms connected together with all of the technical kit and paraphernalia to contact people across the region.

The Bunker was manned by various teams. The Police, led by an Inspector who is their “Silver Commander” for the day’s event. He leads various officers, including the 6 Police Motorbike outriders who patrol the 75 mile course. The Scottish Fire and Rescue Service are represented as are the medical team who have medics and an ambulance on the course in case of accidents. The Police and Fire Service are also in touch with their main control centres to ensure they are aware of and can manage any other incidents that might arise on the route from issues that aren’t related to the Tour o’the Borders. There is a company called Contraflow Ltd who manage all the road signs, thousands of orange and white traffic cones and the temporary road closures are present alongside officials from Scottish Borders Council. Finally, there is the Chief Marshall who leads all of the c100 marshals on the course and the Hillside Outside staff and volunteers who keep in contact with the marshals on the course to ensure everything goes without a hitch. The cost of all of this is covered by the entry fees that the riders pay to enter the event.

The attraction of the event from a cyclist’s perspective, apart from the closed roads, is the chance to pedal through the beautiful and often remote Borders countryside and rolling hills. Whilst these hills present a challenge for the legs and stamina of cyclists they also pose a major logistical challenge for communications for those in the Bunker and the marshals and convoy on the course. Anyone who has ever tried to use a mobile phone in some of these locations will be more than well aware of the gaps in coverage. To avoid these gaps some of the marshals have satellite phones to ensure that we have contact with them. Even with the satellite phones communications are occasionally patchy.

The riders leave in waves, the first batch leave Peebles at 6.50am and the last batch at around 7.30am. There are two courses for the cyclists, a 75 mile option and a “shorter” 55 mile option. What’s apparent very quickly is the different speeds that are in play on the course. The first riders complete the 75 mile circuit in just 3 hours 22 minutes and are having a well earned brew and bacon roll back in Peebles at 10.15am. Meanwhile the final riders complete the course after almost 8 hours. Whilst this is a great achievement for the individuals and it might be their very first long distance ride, the spread of times causes a real challenge for the Bunker because of the way the road closures work.

The event is managed under a Temporary Road Traffic Order (TTRO) which has the effect of closing the public highway and creating a private event that is being managed from the Bunker. The key word though is “Temporary”. The TTRO is given for short periods of time for each road that the event moves along. The job of everyone in the Bunker, the marshals and the outriders is to make sure we get all the cyclists through safely and the roads open again before the TTRO expires. It’s a tricky business and involves the Chief Marshal having to make difficult decisions about asking some riders to stop to ensure the roads can reopen on time. The organisers are acutely aware of the disruption that the road closures can cause and everyone is focused on making sure we get the roads reopened on time.

To help ensure that this is achieved is a small convoy of vehicles follows behind the last cyclist. The convoy includes an ambulance, a bin lorry (to collect any litter that is found), 2 ‘broom’ wagons to provide transport for any cyclists that can’t complete the course, the lorries from Contraflow Ltd that collect the cones and signs and motor cycle outriders. The Chief Marshall is constantly trying to squeeze the convoy up the road to ensure we get those roads reopened on time.

Thankfully, we have a relatively incident free day, there are a few tumbles and a few cyclists have cuts and bruises or “road rash” in the jargon for the medics to deal with. The most serious crash involved someone breaking a collarbone and having to go to hospital. I’m told that there’s been worse in previous years including the year when I cycled when the event was stopped and the Air Ambulance was called in for one poor chap who crashed at the bottom of Talla. 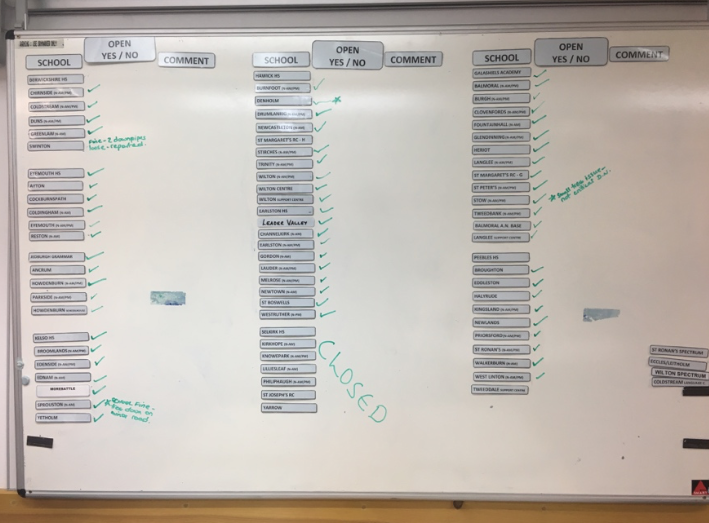 We didn’t close any schools!

The last cyclists complete the course at just before 3.30pm and we get the final roads reopened a few minutes ahead of plan. We then make a few phone calls to try and find out what’s happened to 3 cyclists who have not been registered by their timing chips as having crossed the finish line. It turns out they had failed to finish and gone home under their own steam. I’m impressed by the professionalism of everyone to ensure that every rider is accounted for safely.

We pack up and load all the kit into the cars of the folk returning back to the Touro office in Peebles. That’s Touro done for 2018 and we leave the Bunker and the list of Schools on the whiteboard for whatever the next event is that will be managed from the basement of Council HQ.

I’m left with the memory of how much work and and effort goes into arranging Touro and how a really focussed and professional group of people create and manage an event that brings much needed tourist revenue into the Borders economy. The team spirit and collaboration of a huge group of volunteers working alongside the emergency services and council to make Touro a safe and enjoyable experience for thousands of people is something that we should all be very proud of.

Anyway, where’s my bike ? I need to start training for next year …