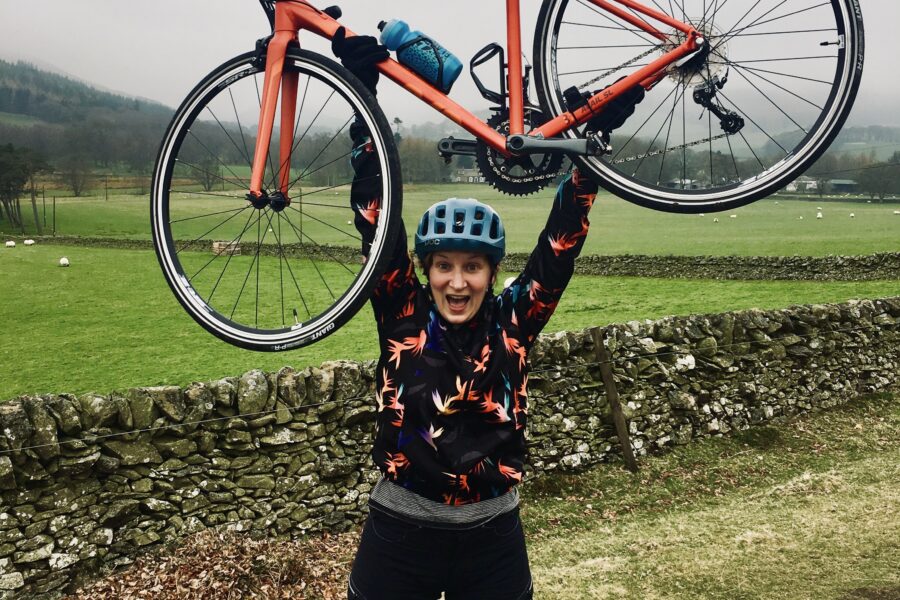 Guys, it’s getting serious – I finally got my road bike!

After a few test ‘drives’, I settled on the one I wanted.  My final choice came down to two very similar models and I opted for the one I had fancied all along…. because it’s orange. And by happy coincidence it was the one I was most comfortable driving…. I mean riding.

The wisdom of the Bike Ninja when I bought my first bike was that I should ‘buy the lightest bike you can afford. Or become lighter yourself.’ Becoming lighter has never been part of any of my life plans, so buying the lightest I could (as long as it was orange) seemed like a good criteria. And sure enough, my first venture out on my new bike was a revelation – it really made a huge difference, being on something so light.

What I was also aware of however, was how flighty the road bike is. Compared to the heavier hybrid I’ve been on or the chunky mountain bike, this thing feels very light and easy but also like I could easily overdo things and come a cropper. Coming down hills feels speedier than anything I’ve ever been on before but the brakes feel far less responsive. I’m not sure I feel particularly in control either, which is alarming.

So it’s taking a bit of getting used to. It’s how I felt when I was learning to drive – everything I do, I am having to think about. Nothing is coming naturally. I’m trying to keep up my pace and momentum so I’m stable. I’m looking up at the road ahead and getting my bottle without wobbling. I’m keeping my elbows soft while trying not to accidentally pull the brake instead of change gear. And it all takes practice.

I was reluctant to add cleats and clips into this heady mix of potential high speed on road disaster. But the Big Kiwi, Pippa and Mr Bike Shop, all said I should just get on with it. So I did. With the help and endless patience of Pippa. I spent an hour on the grass outside my house with her, going round in (much wider than instructed) circles clipping and unclipping, stopping and starting again. I had two fails when I ended up lying down on the grass with my bike still attached to my shoes, in front of the local dog walkers, but it was the best thing I could have done.

I’m still finding that there is an awful lot to think about, especially now that I am actually attached to the bike but I have been trying to put in the miles. I’m managing shorter rides of about an hour through the week then a longer one of two hours, or a wee bit more, at the weekend. This is working out fine with the slight issue that anything over two hours seems to require a nap later in the day. I know there are food stops on the Tour but what I’m not clear on, is if there are any comfy chairs for a wee nana nap, halfway round. Here’s hoping….

Grab your bike, or get one, and join Lou on her journey